Biography
J.H. Murray came to Australia in 1856 and ten years later was teaching at the National School in Parramatta. On 29 April, 1876, his son E. N. Murray, opened a small hardware business in Church Street Parramatta. In 1877 his brother William Richard acquired Charles Tuke’s general store next door. In this store you could buy … Pianofortes and American Organs on easy terms and sewing machines on time payment, no interest. The ‘no interest’ purchase was a new way of selling goods and at the time it appears to have been a successful for the brothers as they expanded the business and opened another hardware and crockery shop. This time on the opposite side of Church street. At this time ‘Murray Brothers’ employed over 100 people working in the shop and the various factories as well as the woolen mills. In 1884 the two brothers joined forces and formed what would become one of Parramatta’s best known businesses – ‘Murray Brothers’. A furniture section was added to the other branches of the business which included selling pianos & organs, the manufacture of clothes and even the production of their own jams. At one stage the furniture and jam factories were located in the old Ice Works in Smith Street beside the river. Murray Brothers purchased the ‘Woollen Mill’ from the French family in 1887 for 2000 pounds and operated it under the name of ‘Parramatta Woollen Mill’. They installed the machinery acquired from the ‘Byrnes Australian Mill’ in Granville. Water from the nearby Hunts Creek was used for scouring the wool which was then dried in the sun, sorted, carded and woven into medal winning rugs and blankets. ‘Parramatta Woollen Mills’ won gold medals at Royal Agriculture show in Sydney in 1897, 1898 and 1899 for its rugs and blankets. In 1908 Parramatta Woolen Mills won a gold medal at Franco-British exhibition for uniforms. In 1911 the mill was sold to A. E. Daking Smith. In 1889, five years after the brothers’ amalgamation, a towering new edifice arose, at a cost of 10,000 pounds, on the site of the Murray Bros store, signalling the arrival of the town’s first shopping emporium. A range of household items were sold including furniture and furnishings, crockery, pianos, organs, clothes and jams. In the 1890s Murray Brothers received a Certificate of Merit for colonial made furniture from the Royal Agriculture Society. During 1903 Murray Brothers was divided into two companies, Murray Bros Ltd. and Murray’s Limited, maintaining separate but adjacent businesses. Drapery and furniture was under the control of Murray Brothers and the hardware section under the control of Murray’s Limited. W. R. Murray became sole proprietor of Murray Bros. The plumbing section was taken over by T. H. Harvey and E. N. Murray and became Harvey and Sons Pty. Ltd. In 1923 fire guttered the furniture factory at the rear of the Church Street store damaging stores of furniture and expensive cabinet making machinery. The damage bill ran into many thousands of pounds. Two new stores were built in 1926. A Murray Bros store was built on the north west corner of Church and Macquarie Streets on the former site of the National School. A Murray’s Ltd store, which sold hardware, was constructed on the northern side of the Town Hall facing Macquarie Street. All three buildings still stand to this day. During the Second World War Murray Brothers donated 1000 pounds to the war effort. In 1947, Murray Brothers manufactured their last consignment of Blind and Curtain. Also that year the business was purchased by Burns Philp and Co. Ltd. Murray Brothers in August 1958 expanded at the rear of their store, constructing a four storey building with a Marsden Street frontage. Murray Brothers purchased the land the Murray Bros store was erected on from the Church of England for 250,000 pounds in May 1954. The store was built on the site while the land was still under the lease from the Church. Murray Brothers became Parramatta’s oldest and highly respected departmental store with a policy of supplying the needs of residents in and around Parramatta. In 1978, Murray Brothers closed their doors, after 102 years of trading in Parramatta. 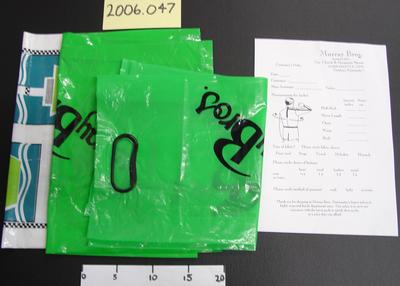